The phase I included the following four activities:

The comparative research consisted of the following three components:

Country reports included policy review and survey with stakeholders such as policy makers and teachers to explore how 21st century skills/non-cognitive skills are adopted in education polices in each country. E-contest aimed to collect voices from teachers and students in the classroom complementing country reports,. This e-contest asks teachers and students to present their thoughts and practices on transversal competencies through essay or video. Regional synthesis study complied findings from 10 country reports, addressing the policies and national strategies for promoting 21st century skills/non-cognitive skills.

The research started with the six countries and economies (i.e. Japan, Republic of Korea, China, Malaysia, Mongolia and Thailand). After the detail of this research project on “21st century skills” was announced on UNESCO Bangkok website, four more countries (i.e. Australia, India, Thailand and the Philippines) showed their strong interest in the research project. Eventually, the comparative research included 10 country reports.

Country reports analyzed and discussed from the multiple angles including the following points:

From August to December 2013, Tokyo Tech and UNESCO Bangkok organized the e-contest “Skills for a Better Life”. This e-contest is for students and teachers reside in Asia-Pacific region in order to understand how students and teachers in schools perceive “21st century skills” and practice these skills in their daily life by collecting their ideas and actual experiences in their schools. Entries for this e-contest could be made in two categories: Videos (Type A) and Written articles (Type B) so that people could join this e-contest according to their ICT availability. When the e-contest closed on 15 December 2013, 196 submissions from 20 countries across the world were received. Seven winners were selected for Type A (Videos) and three winners for Type B (written articles). The differences in the numbers of Winners were reflecting the higher number of submissions in Type B. The results were announced on the UNESCO Bangkok website on February, 2014. 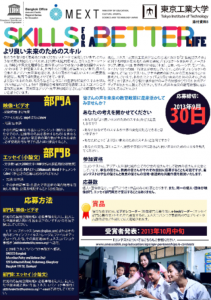 2. An expert meeting for sharing the research framework of the comparative study

As a preparation of this project, Tokyo Tech and UNESCO Bangkok jointly organized a 2-day expert meeting in Bangkok, Thailand on 7-8 March, 2013. A total of 45 experts from 10 countries (Australia, China and Hong Kong SAR, Indonesia, Japan, Malaysia, Mongolia, the Philippines, Republic of Korea, Sri Lanka and Thailand) participated in the meeting. During the meeting, the experts

Based on the discussion and agreement of the meeting, overall research framework and timeline were finalized.

Importance of information sharing was repeatedly raised during the UNESCO expert meetings. UNESCO Bangkok has developed an information portal for education policies (National Education Systems and Policies in the Asia-Pacific Region – NESPAP). However, NESPAP has not been fully utilized due to several usability issues including less user-friendly login process. Acknowledging this, Tokyo Tech team worked with UNESCO Bangkok to develop a participatory education policy database to realize the effective information sharing. The database was designed to integrate the existing databases and portals of UNESCO Bangkok using the Drupal CMS system, which was used for the NESPAP.

Tokyo tech team successfully developed individual functions required for the participatory education policy database. However, integration of the individual functions was not completed. Main cause of the integration incompletion was the little interoperability among the basic modules, which required an intricate development. It is highly possible that the weak interoperability between the Drupal modules will cause technical problems in the future management and maintenance. Thai is, phase I clarified that the development of the database needed different approach to ensure the sustainability of the future maintenance.

Basic principle for the next phase was summarized into the following two aspects:

First is to integrate external correspondent web services into one interface (Mashup). Second is to implement all the functions on a Content Management System (CMS) using plugins.

In collaboration with UNESCO Bangkok, the regional symposium was organized to share and discuss the preliminary results of country report from the 10 research participating countries and economies in Asia and the Pacific region (17-19 October, 2013). A total of 52 researchers, practitioners and policy-makers and UNESCO Bangkok staff attended the symposium. 12 countries and economies were represented, including Australia, China, Hong Kong SAR, India, Japan, Malaysia, Mongolia, the Philippines, Republic of Korea, Singapore, Sri Lanka and Thailand. The regional symposium was conducted as an annual meeting of the Education Research Institutes Network in Asia- Pacific (ERI-Net) that is a research net-work hosted by UNESCO Bangkok.

Also, participants agreed to introduce the new term, “transversal competencies”, for this research acknowledging “21st century skills” are not limited in an area or a subject but should be recognized as something transverses knowledge and skills in multiple areas.

Outcomes of the phase 1